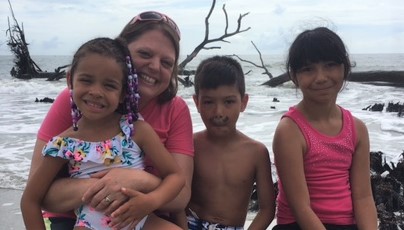 I know that I’ve been popping in and out this summer. It’s been a very challenging year for us, and we are going through some difficult things right now. As I try to parent through the darkness, I realize, more than ever, the significant impact that adoption can have on our children. We adopted all three of our darlings at birth, and they have never known any other life but the one we have provided. So it’s easy to fall complacent, unaware of the deep-rooted hurts and loss that go along with adoption.

Adoption is a beautiful thing. It is truly the Gospel in action. But adoption is also a reminder of the broken world that we live in as a result of sin. Broken families, infertility, loss of identity, attachment disorders, sensory processing issues–all of these are a part of the brokenness that accompanies adoption. Of course, families find love in their uniqueness; broken hearts can be mended; and help is available.

When someone hears that a baby has been exposed to alcohol, they automatically fear fetal alcohol syndrome, which is a very real concern. According to the Center for Disease Control, “More than 3 million U.S. women are at risk of exposing their developing baby to alcohol.”

Because there are so many unknowns, the CDC, the U.S. Surgeon General, the American College of Obstetricians and Gynecologists, and the American Academy of Pediatrics advise pregnant women not to drink alcohol at all.

They note, on their web sites, that pregnant women who drink alcohol risk giving birth to a child with a fetal alcohol spectrum disorder (FASD). These conditions range from mild to severe and include speech and language delays, learning disabilities, abnormal facial features, small head size, and many other problems.

The physical side effects are easier to identify. But many people don’t understand the unseen side effects–speech and language delays, learning disabilities, sensory processing issues, and behavioral issues. These issues are a little harder to discern.

Okay, you might be able to understand the problems a child would have if they have been exposed to alcohol or drugs. But there’s another unseen factor that affects the development of many adopted infants–attachment disorders, which can include angry outbursts, inappropriate behavior, and oppositional defiance disorder (ODD).

In fact, studies have been done to prove that adoption can adversely affect a child still in utero. Nancy Newton Verrier, Ph.D., refers to this as The Primal Wound:

I believe that the connection established during the nine months in utero is a profound connection, and it is my hypothesis that the severing of that connection in the original separation of the adopted child from the birth mother causes a primal or narcissistic wound, which affects the adoptee’s sense of Self and often manifests in a sense of loss, basic mistrust, anxiety and depression, emotional and/or behavioral problems, and difficulties in relationships with significant others (21).

MentalHealth.net agrees with Verrier that there are often long-term psychological issues that can arise at different times for an adopted child:

A multitude of issues may arise when children become aware that they have been adopted. Children may feel grief over the loss of a relationship with their birthparents and the loss of the cultural and family connections that would have existed with those parents.

This feeling of loss may be especially intense in closed or semi-open adoptions where little or no information or contact is available with birthparents. Such grief feelings may be triggered at many different times throughout the child’s life including when they first learn of their adoption, during the turbulent teen years, upon the death of other family members, or even as when becoming a spouse or parent.

There can also be significant concerns about feeling abandoned and “abandonable,” and “not good enough,” coupled with specific hurt feelings over the birthmother’s choice to “reject” the child” to “give me away” or “not wanting me enough.” Such hurtful and vulnerable feelings may be compounded should the child learn that the birthmother later had other children that she chose to raise herself.

I have been a mom for 10 years now, and I am just starting to understand some of the psychological effects my children face as adoptees. They are my miracle babies with no phsyical side effects from the harmful things they were exposed to in utero. But when our youngest was born, we started to see a change in our oldest child, who was only five at the time. Out of respect for her privacy, I won’t go into all of the challenges she has faced, but the effects of her adoption started to become crystal-clear to us.

There is no telling what can trigger these issues–a change in life (such as a new sibling), trauma, a move to a new home, a change in school, puberty. We have always shared with our children everything we know about their biological family. We have celebrated their adoptions with them, and they all love to hear their own stories. Our children are adored by us and by our extended family. In fact, no one even refers to them as our “adopted children.” They are just ours forever.

The truth is that adoption carries a lot more with it than meets the eye. My children are not “lucky to be adopted.” They carry a brokenness inside of them that may never be fully healed. I am blessed to be their mama, but I also ache to know that there is something missing in their identity that I can’t provide. And this brokenness looks different in each adopted child. For one, it may be attachment disorder; while for another, it may just be a difficulty in processing cause and effect. Or I may never see any effects in my other children. Only time will tell.

Why do I share all of this information with you? I need you to understand that my children come with a lot of baggage that they didn’t bring on themselves. They may, at times, appear to be out of control or full of drama, but these are issues that we are working through as we process the different effects that adoption has had on their lives.

If you haven’t adopted, then please extend love and grace to adoptive families. Don’t point fingers or suggest that we are bad parents. We love and adore our children, and we are helping them to fight demons that you can’t possibly imagine.

And if you are an adoptive parent and understand some of the things I have shared, let me encourage you as I stand with you in the trenches.