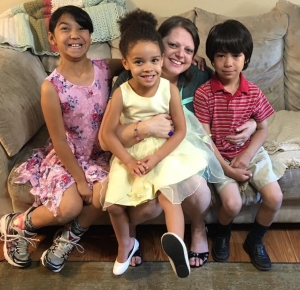 Over 10 years ago, I became a mother. The moment they handed me the baby and gave us our marching orders from the hospital, fear and anxiety took over my heart. What was I doing taking this baby home with me?! Didn’t they know I had no experience whatsoever?!

The first night was the hardest. We were staying at my aunt and uncle’s house while we waited for the paperwork that would allow us to go home. It was April in the South, but there was an unusual cold snap that crept in that week. Unbeknownst to us, one of the windows in our bedroom had been left cracked, and the room was freezing cold. Thus commenced an all-night launch into parenthood with a screaming baby being passed between us. Oh, what bliss when we realized that all we needed to do was shut the window!

We were so overwhelmed with our new roles as parents that we just seemed to stumble through those first weeks. When you adopt, there’s not much time to prepare. One day, you’re a hopeful adoptive mom; and then, suddenly, you receive a call, rush to the hospital, and go home with a baby. Of course, there’s a lot of paperwork that comes first, but the actual connection with a small human being? Well, as an adoptive mom, you don’t get to feel those kicks as the baby grows inside of you. You don’t get to read books, eat nutritious foods, or sing to your unborn child. You pray and cry and wait, and then they are here in your arms, and you don’t know what to do.

Somehow, we eventually became a family and bonded with our adorable baby girl. We loved her so much that when we were given the second chance to adopt (a biological sibling, no less), we jumped at the chance. We thought we had it all figured out this time. After all, we were old pros!

By the time we decided to adopt for a third time, everyone was convinced that we were just completely crazy. We had one of each. Why wasn’t I content with that? But my mommy-heart beat for this third child. I wanted her; I longed for her; I knew she was meant to be mine. And the challenges with her adoption were almost more than I could handle. But God is good all the time, and He helps us when we are in over our heads.

Three children would be enough for most people. We were so blessed to have three biological siblings all come to us through adoption. What a gift! But my mommy-heart couldn’t rest. There are over 130 million orphans in the world! How could we not keep offering hope for those in need?

So we became foster parents for a short time. In just a few months, 10 children came to us, and 10 children left us. I will never forget any one of them. They are my children forever and always.

There were the two sisters who came in the middle of the night, one asleep and the other one bounding down the driveway. “What’s your name?” she boldly asked as she crashed through my front door at two in the morning. “Mama Katie” became my name for these precious children who only needed me to mother them for a short while. Her little sister clung to me, snuggling up to her new “mama.” My heart hurt so much when they left; they didn’t even know they wouldn’t be returning after their visit with Dad. I cried all day.

There were the three who came to me next for respite. The sweet little two-year-old who had so many allergies, we had to journal everything she ate. She stole our hearts, and we were so excited when she found a forever family. There was the spitfire six-year-old who absolutely refused to stop stealing from her foster siblings and who never obeyed. She hid under the table when it was time for her to leave. And there was our sweet, non-verbal two-year-old who stayed just five days, yet warmed our hearts with her smile. Our hearts ached for her to speak, but she said nothing.

Then there the two cousins, who were found left in a hot car in the middle of the night. The baby was listless and needed to be revived. The older girl had obvious mental disabilities and refused to be touched or loved on by anyone but our oldest daughter. They were with us for 12 hours and then left just as quickly as they came.

There was our boy, who dealt with so much at six years old that he burst out in uncontrollable anger. He was heartbroken when his caseworker told him he had to be moved to a more permanent home. He loved us, and we loved him, but he didn’t know what to do with that love. And we were just an emergency home, not meant to be long-term.

Our last child stayed with us for two months. During that time, we also had her younger brother for a weekend. These children had severe mental issues as well, but they loved so well. She hated vegetables, though, and could hold them in her mouth for hours! She had also never felt grass before and would scream in terror whenever I, innocently, sent her outside to play. It wasn’t until I finally connected with her biological parents that I learned they lived in such a dangerous area, the children had never been sent outside to play before. I still keep in touch with her mama.

I see many posts online about people who don’t want to celebrate moms today because they aren’t a mother themselves. They want to be a mom so bad. And there are so many–so, so many–children in need of a mom to call their own. Today is for the birth mother who placed three of four of her children with us. Today is for the moms of my other children–moms who couldn’t be there for their children as they should be and who most likely live with regret. Today is for adoptive moms and expectant moms and foster moms everywhere.

He gives the barren woman a home, making her the joyous mother of children. Praise the LORD (Psa. 113:9).

Perhaps you are one of the ones struggling to be called “mother.” If you are waiting to adopt, don’t give up hope. If you struggle with infertility, I know your pain and feel your hurt. If you want to be a mother, can you foster a child? Even single women are eligible to be foster moms! Can you be a mentor to a child in a program like Big Brothers/Big Sisters? Can you get involved with the youth at your church?

I don’t know why the desires of your heart haven’t been answered yet. But I do know that I serve a God Who keeps His promises, and He says in His Word that He makes the barren woman the joyous mother of children. What that looks like may not be what you envisioned, but His ways are always better than ours! I also know that I carried the burden of longing to be a mom for five years, and now I am mother to 13.

So, don’t let this day be one that brings you down into despair. Instead, look to the God of hope, Who promises to fulfill the desires of your heart. Know that He loves you and has a perfect plan for how He will form your family. Don’t give up; give glory!

Delight yourself in the LORD, and he will give you the desires of your heart (Psa. 37:4).