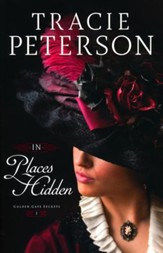 In Places Hidden by Tracie Peterson, step back in time to San Francisco in the early 1900s. Camrianne Coulter’s brother is missing, and her family has sent her on a mission to find him. On her journey, she meets two other ladies, who have missions of their own. Deciding to help each other, the three women become fast friends and set out first to find Camri’s brother.

Upon arriving at his house, Camri quickly realizes that there is more to the mystery than meets the eye. When she discovers that her brother helped to free an accused murderer, Camri fears that her brother could be in real danger. Even the house servants seem to have secrets to hide.

When Camri meets handsome Patrick Murdock, she is immediately drawn to him but wonders what secrets of his own he carries. But knowing that her brother released him from prison, Camri decides to trust him and step into a world that is very different than the one she has always known.

As Camri seeks to find her brother, can she also find herself and realize that her views and beliefs are not the only ones that matter? And can she find friendship and love in a world of secrets?

While I typically like Tracie Peterson’s books, I found this one to be a bit slow. Peterson seemed to spend more time talking about what Camri would do then actually showing her doing it. She is there to search for her brother, yet it takes her a long time to get to the point where she is actually searching for her brother.

Also, Camri’s superiority complex is quite annoying. She believes in women’s rights but refuses to let other women make their own decisions. Although Peterson addresses this area in her book, I still found it a very annoying character trait of Camri’s.

Finally, I found the plot to be incredibly predictable–to the point where I could almost quote ahead what would happen next. In fact, I am sure I can tell you what is going to happen in her next two books as well.

If you’re looking for a light, predictable read, then this book is for you. But if you want a more challenging read or something with plot twists, then I would recommend something from Dani Petry or Ronie Kendig.