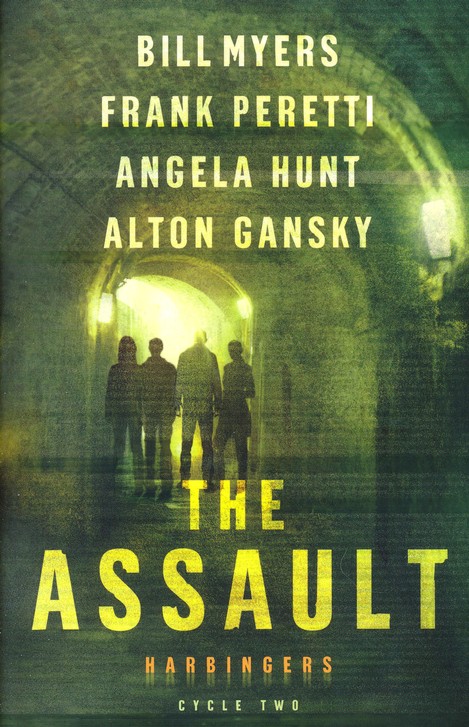 As an author, I appreciate when someone is willing to review my book, so I enjoy sharing what I am reading with all of you! Some books have been a let-down, but most of the time, I find authors who have a real talent at this writing gig.

The latest book I’ve been reading is the second cycle in the Harbinger series by Christian suspense writers, Bill Myers, Frank Peretti, Angela Hunt, and Alton Gansky. “The Assault” is their second novel that reads almost as a television series. Each author is given a character and writes a short novella from that character’s perspective. Together, they create a team of four unlikely characters, who join together to fight against the darkness in this world.

In “The Revealing,” Bill Myers writes from Brenda’s perspective. The rough-edged tattoo artist has an uncanny ability to draw the future. She doesn’t interpret the drawings; she just draws what she sees. When the team is asked to help an old acquaintance of the professor’s in Rome, Brenda begins to draw things that she hopes will not happen. Within minutes of arriving in Rome, the team already begins to feel that things are not as they seem. In fact, everything (including the very house they walk into) seems to change from one scene to another. Will the team be able to find reality and hold together as a team? And who is their benefactor?

In Frank Peretti’s “Infestation,” an unknown disease seems to be taking over the world. The professor knows what science says, but his doubts in supernatural beings is shaken to its core when he begins to see people losing their eyes and suddenly exploding. Will the team be able to find the source of the infestation before it takes one of their own?

In Angela Hunt’s “Infiltration,” Andi is in need of a vacation after the harrowing events she and the team had just experienced. But as the team begins to plan their next move at a beach house in her hometown, Andi begins to hear voices and struggles with nightmares. When she seeks help from a psychiatrist, he recommends hypnosis, but the results could be deadly. Will Andi ever regain her sanity, or will she literally lose her mind?

In Alton Gansky’s “The Fog,” Tank finds himself out of his league when the team is requested by an unknown benefactor to attend a high-profile party at a high-rise downtown. But the party is abruptly interrupted when what feels like an earthquake rocks the building. When Tank looks out the over the city to see the destruction, he instead sees a fog that is quickly rising and covering the city. But this fog is unlike any he has seen before, as are the creatures that seem to be swimming in it. When Tank realizes that the creatures have death on their minds, he realizes that he must make the ultimate sacrifice to save his friends. Will the team be able to help him in time?

While each of these stories could stand alone, together they make a unique series that draws on the strengths of each of these beloved authors. If you’re looking for a good Christian suspense, I highly recommend you try out this series!

*I received a free copy of this book in exchange for my honest review. All opinions are my own.