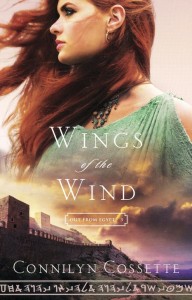 “When you go out to war against your enemies, and the Lord your God gives them into your hand and you take them captive, 11 and you see among the captives a beautiful woman, and you desire to take her to be your wife, 12 and you bring her home to your house, she shall shave her head and pare her nails. 13 And she shall take off the clothes in which she was captured and shall remain in your house and lament her father and her mother a full month. After that you may go in to her and be her husband, and she shall be your wife. 14 But if you no longer delight in her, you shall let her go where she wants. But you shall not sell her for money, nor shall you treat her as a slave, since you have humiliated her”–Deut. 21:10-14

In Wings of the Wind, the third book in the Out of Egypt series, Connilyn Cossette creates a woman who is forced to follow the Torah written in the scripture above. What would this law look like for a Canaanite woman? What would it be like for a Hebrew man, who is marrying someone outside of his faith? Connilyn Cossette wanted to know the answers for herself, so she decided to create a story that depicted such a scenario.

Alanah is a Canaanite woman, determined to seek vengeance for her family, whom she lost in battle to the Hebrews. Disguising herself as a man, Alanah takes up her bow and arrow and marches into battle, determined to take the blood of at least one Hebrew in exchange for the blood of her family. But when Alanah finds herself in the midst of battle, she realizes that she may be in over her head. Before she knows what is happening, she is shot by an enemy arrow and discovered by a Hebrew soldier.

Upon waking up in a Hebrew tent, Alanah is certain that death is near. But what she finds is much worse–she must marry the Hebrew soldier! She has thirty days to decide–will she stay married to the enemy or will she go back to a the home that is no more? As she begins to learn the ways of the Hebrews, she sees that one thing is clear:

“The Hebrews had been transformed from Pharaoh’s property to a nation of warriors in the space of forty years. Warriors who were more than ready to take over Canaan.”

Although Alanah fears that she will spend her life as a slave, she soon realizes that these Hebrews are more than they appear. Who is this God they serve and why does He hover nearby in a cloud? What is this mysterious manna that drops from the sky every day and makes the weakest strong and the oldest young? Can a God such as this love someone who is not part of His chosen people?

This is definitely a love story, but it is the story of God’s love for each of us–the Jew and the Greek. The slave and the free. Man and woman. Young and old. It is a story that reminds us that God never leaves us nor forsakes us, that He can set the captive free, and that He is a God who can supply all of our needs!

“There was no hunger. No thirst. Only complete satisfaction. Instead of feeling faint, I wanted to spring to my feet, to run, jump, and twirl like when I was a little girl. Yahweh had healed me…The God that took the Hebrews out of Egypt was no figment of Mosheh’s imagination. He had spoken to me–to me!”

As Alanah begins to find love and healing in the Hebrew camp, she also begins to find a home. But when Midianite traders kidnap her and her friend, Moriyah, Alanah is certain that she will never see home again. Again, she is faced with doubts that the Hebrew God could love her, but she is determined to see her friend returned to her family and won’t give up until she has completed that task.

As the pair break free and set off to find the Hebrew camp, Alanah is faced with many challenges along the way, including coming face-to-face with some of the bitterness from her past. Even as she faced prostitution in the temple, Alanah sees God’s hand in her life and realizes that He has brought her to this place in order to bring her to Him and to use her for His glory.

“After seeing the swirling Cloud with my own eyes and comprehending Yahweh’s power, the idea that Ba’al was the god of storms was almost laughable. There was only one God who had commanded the sea to split in two and one God who had crippled Egypt with hail and fire. And that God was no deaf and mute idol of wood and stone. He spoke to me. He heard me in the river. He was alive.”

The story is also told through the eyes of Tobiah, a Hebrew soldier, who stumbles upon a Canaanite woman in the midst of battle. As a follower of the Torah law, Tobiah is forced to take her as his wife, a decision that is not supported by his family or the woman he was to be betrothed to. But this Canaanite woman strengthens and challenges him in ways he has never before experienced, and he finds himself falling in love with her.

But Tobiah is still a soldier and must still go to war after their first year of marriage is over. Eager to see the promises fulfilled of conquering the land of Canaan, Tobiah struggles to stay home as commanded or to take up his shield and fight. When Alanah goes missing, Tobiah assumes that she has made her choice to return to her people, so he decides to go back into battle.

But why does his heart still long for the woman with fiery red hair? Why can’t he move on and marry the woman he was supposed to marry before meeting the Canaanite? And what has always doing right brought for him except a lot of pain? Although Tobiah is a law-abiding, faithful servant of Yahweh, he must learn that he is not the one in control, and he cannot protect those he loves unless Yahweh ordains it.

“I had done everything in my power to live up to my promises, but it was never enough. You are not a god. The words appeared in my mind with uncanny clarity…Had I been trying to be my own god? Determining my own steps instead of ceding to Yahweh’s plan?…Where my strength and ability to protect them had ended, Yahweh Himself had taken up the cause.”

As Tobiah comes to realize his own need for God, will he finally find the peace that has eluded him since his own family was taken in Korah’s rebellion? Will he be able to exact mercy and grace, or will he seek vengeance for the sins he has endured?

This is a love story. Yes, indeed it is about the love between a man and a woman; but even more so, it is about the love that God has for each one of us, whether we are Hebrew or not. While the characters are fictional, the history is not. The stories of the Israelites in the desert, accepting manna from the sky, fighting and winning impossible battles, and destroying Jericho simply by marching around the city with trumpets are all absolutely true. The Gospel story is woven intricately throughout these pages, urging the reader to dive deeper into scripture to find the treasure that lies there. And Connilyn consistently points the reader to scripture with carefully-researched details and in-depth knowledge of biblical history.

“It is fascinating to me to consider how our lives affect one another and even the lives of people we do not even know–and also how sometimes our poor choices may end up being used to glorify God in ways we never thought possible.”

Can God use a Canaanite woman? Can He use a harlot? He can, and He has! So how can He use you for His glory?

*This book was provided to me by Bethany House in exchange for my honest review. All opinions are my own.